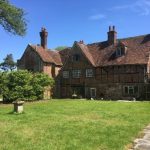 Wolfhall, on the outskirts of Burbage and on the edge of Savernake Forest, is the legendary Tudor manor that came to epitomise the ruthless world of Henry VIII’s adviser Thomas Cromwell and inspired Hilary Mantel’s novel Wolf Hall, now also a BAFTA award-winning BBC2 drama starring Mark Rylance.

The current owners of Wolfhall can trace their ancestry back to the 11th century owner of Wolfhall, Richard Estormit   The Estormit/Esturmy/Seymour family held the office of hereditary wardens of the Royal Forest of Savernake – as their descendants still do today.

Wolfhall has strong links to the Tudor dynasty.  In the early 16th century, Sir John Seymour, who was a courtier serving both Henry VII and Henry VIII, had high ambitions for Wolfhall and was visited twice by Henry VIII in 1535 and 1539.  It was at Wolfhall that Henry VIII met Sir John Seymour’s daughter, Jane, who was to become Henry’s third wife in 1536 and mother of King Edward VI in 1537.  Jane sadly died shortly after childbirth, just a year and a half after marrying Henry.

Edward Seymour, Jane’s brother, was Lord Protector (effectively the Head of State) for Edward VI as he was a minor, and held great power in this role, but was overthrown in 1549.

The building itself combines three distinct architectures, from the Tudor, Georgian and Victorian periods.  Whether this is the site of the medieval Wolfhall has been a matter for debate over the years.  Having probably one of the best-preserved Tudor brick-built sewers in Britain and with recent archaeological work which has uncovered tiles, passages and tunnels, the evidence shows that this is the real Wolfhall.

Restoration work continues at Wolfhall today.  If you would like to be part of this archaeological journey and help support the work at Wolfhall, then why not become a Friend of Wolfhall?