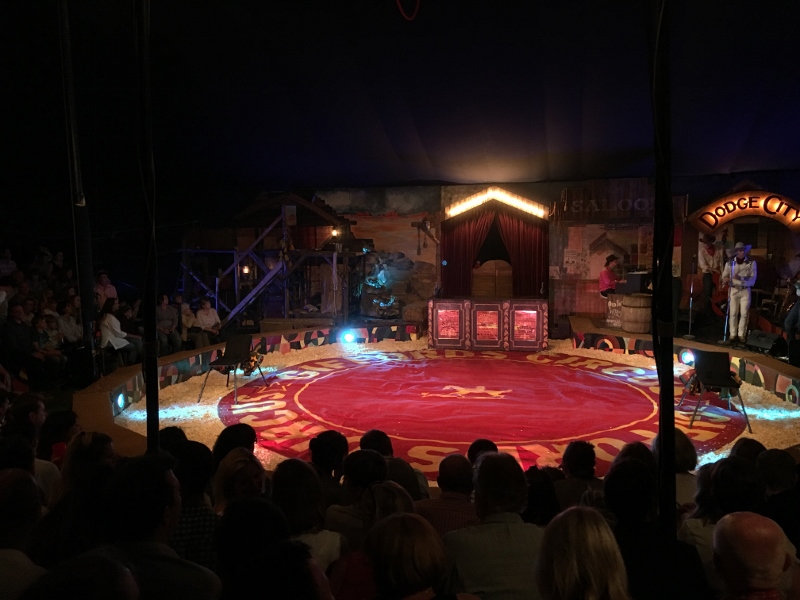 ‘We don’t really like circuses – not really our thing,’ my husband, Tim, said.

‘Well this circus is a bit different.  Haven’t you ever heard of Gifford’s Circus?’ they asked incredulously.

We had to confess that we hadn’t heard of Gifford’s.  But the evening was going to include a great group of people who we knew and a picnic on Marlborough Common before the performance.  So we said yes.

We were still having our doubts as we packed our part of the picnic.  ‘I can’t stand clowns,’ I said to Tim.  ‘Nor can I,’ he said, ‘but the picnic will be fun.’

We arrived at Marlborough Common to see a big top – well, not that big and in those days even smaller than the one used today.  There was a gentle buzz of people preparing for the evening, gathering expectantly, a music organ playing in the background.  It was a magical setting, with a feel of a country fair and old-fashioned Gifford’s tents and stalls set up around the big top.

Our party was already setting up tables and chairs, laying out tablecloths, unpacking boxes, bottles, and all the fineries of a good picnic.  Everyone was so excited – all seasoned Gifford’s Circus aficionados, they particularly extolled the virtues of the hilarious clown, Tweedy.  CLOWN!  Tim and I looked at each other in horror.  ‘He’s not like a normal clown, he’s really funny  - you’ll see!’

After the most fabulous picnic, we packed everything up (including all our litter!!!) and made our way to the big top.  Usherettes dressed in traditional circus costume welcomed us and we made our way to wherever we wanted to sit – no seat numbers at this circus!  You could feel the excitement rise in the audience as the tent filled up.  We were asked to ‘move up a bit’ to make room for more people and once everyone was in, it began.

The music, the fabulous musicians, what a delight!  The skill of the circus artists, the horses and dogs – just brilliant and breath-taking.  The farmyard animals, geese, chickens, all doing their tricks.  And the story – it’s always about a story.  That year was ‘Caravan’; unmissable, dramatic, funny, unstoppable.  We were taken up in the spirit of Gifford’s and at the half time break, with the music still ringing in our ears, we felt a bit stunned.  ‘Just brilliant, can’t believe it!’

And what about the clown?  Tweedy – he is very, very funny.  He’s not like a normal clown – Pam’s words ring in my ears every time I say this!  You can’t help but laugh from his antics with his pet iron to his tomfoolery when other artists are performing and his interaction with the crowd.  We laughed till we cried.

And all too soon, the evening is over.  The story is told, the acts have performed, they are taking their bows to rapturous, happy applause – our hands are hurting from clapping - but the musicians, well, they are still at their peak.  And everyone is invited into the circus ring to join the performers in a dance to this wonderful, musical crescendo.  And then, mysteriously, imperceptibly, the performers and musicians retreat and suddenly, it’s just us, the public, the adoring public, all chattering, laughing and already looking forward to next year.

We’ve been every year since – twice one year – we wouldn’t miss it.  And neither should you.  If there was one experience that everyone should have, it is the sheer joy of Gifford’s Circus.  We are particularly lucky to be in Wiltshire – Gifford’s is based in the Cotswolds and only do a select number of venues, all in this part of the world.  And we are even luckier for our local performance to be on Marlborough Common – just a few miles north of the Vale of Pewsey and a wonderful setting for something as special as this.

This year (2017), the story is ‘Any Port in a Storm’, devised as usual by Nell Gifford and as a response to her battle with cancer and her drive to make the most of every day.  Sadly, our dear friend Pam won't be there to see it, having lost her battle with cancer earlier this year – but she will be there in spirit and her words still ring in my ears.

The BBC World Service followed Gifford’s Circus through the creative process of this year’s show and the podcast is well worth a listen.

Oh, and if you decide to go, the top tip is to take a cushion to sit on!

So book your tickets now, don’t put it off, this year’s spectacular won’t be seen again.

Gifford’s are on at Marlborough Common in the last week of August and the first week of September (it shifts slightly each year) – you won’t be disappointed!