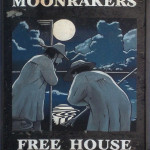 Right in the centre of Pewsey village, on the High Street, is The Moonrakers – or Moonies as it is locally known.

Owned and run by Jerry Kunkler, whose family has lived in Pewsey for many generations, Moonies is a lively pub, with screened sports often available.

Why is it called The Moonrakers?  There are a number of places in the UK that claim to be Moonraker country, but generally speaking it is a term attributed to Wiltshire folk, and in particular those from Devizes – a lovely market town about 13 miles west of Pewsey at the western end of the Pewsey Vale.

As the story goes, during the 17th or 18th century, Wiltshire was a thoroughfare for smugglers coming up from the Dorset coast on their way to the more affluent Midlands.  One moonlit night, some smugglers saw an approaching Exciseman and so quickly dumped the contraband into a nearby pond (thought to be The Crammer in Devizes).  Once the Exciseman had gone, they started to try and get the barrels out of the pond using hay rakes.  The Exciseman however suspected something and came back and asked them what they were doing.  The smugglers said they were raking out the cheese they could see in the water – the reflection of the moon.  The Exciseman laughed at them for being so stupid and continued on his way – but who really had the last laugh?

Opening Times
Monday to Saturday – 11.30am to 11pm
Sunday – 11am to 11pm
View Moonrakers on the web
Visit The Moonrakers' Facebook Page
Category
Pewsey, Public House, PVCR By