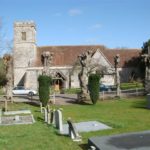 Early records confirm that a church stood here in 1208, but the Norman south doorway suggests a church on this site by 1150 or even earlier. The building, of flint with stone dressings and a tiled roof, stands above the Shalbourne stream on the northern edge of the village.

A Victorian stone and oak porch shelters the south door. Just inside the church an old framed photograph shows the interior before restoration. It was cluttered, fusty and gloomy, furnished with dilapidated Georgian box pews, a tall three-decker pulpit and a gallery. The contrast between the Georgian church of the photograph and the present interior shows how thoroughly the Victorians altered the building.

The church was substantially rebuilt from 1871 – 73 during the incumbency of The Reverend G.R. D. Cooke, whose ministry is commemorated by a brass plaque in the nave. A plaque in the chancel pays tribute to the Reverend Thomas Hungerford Mitchell of Bagshot who ‘built the south aisle of this church.’ This clergyman, who must have been wealthy and seems to have served as curate, made a significant contribution to the rebuilding both financially and (as we shall see) with his own hands.

The architect of the project of 1871 – 73 was George Bodley, a prominent exponent of Victorian Gothic Revival, assisted by Thomas Garner. Their remit was to transform the church from a dreary, old-fashioned preaching space into a stimulating setting for Anglo-Catholic liturgy, then being introduced (sometimes controversially) into many parishes in England. At Shalbourne all the Georgian furnishings were cleared away and a new interior created to focus the attention of worshippers on the altar at the east end of the chancel. This involved dramatic change. What did the parishioners feel as they watched much of their familiar parish church being knocked down and replaced by new work? What did they feel about the changes in worship they no doubt experienced when the rebuilt church was opened on 10th December 1873?

The rebuilding involved the demolition of the original south outer wall of the nave and its replacement by a stone arcade of five arches in the style of the 14th century. A new aisle was constructed to the south of this arcade, providing an additional 90 seats. Although the church was extensively rebuilt, some of the more interesting features of the old building were preserved. So for example the original south doorway was moved to its present position in the wall of the Victorian south aisle. It is Norman, from about 1150, with a semicircular arch and zigzag decoration.

The solid north wall of the nave is from the old building. It is pierced by two original 13th century lancet windows and a single 15th century square-headed window, in which (high up) some old stained glass has survived. Outside, the external stonework of the original north doorway can be seen. It has a plain semicircular moulding. If it is Transitional (as Pevsner and other experts say) then it is later than the south doorway. But is it Saxon and therefore even older than the south doorway?

Back inside, the decorative patterns on the main structural beams of the Victorian roofs in the nave and south aisle are by Bodley. The altered nave and the new aisle were furnished with rows of plain new benches (those in the aisle have since been removed).

A bold screen with a pretty coving separates the chancel from the nave. It was made by The Reverend Thomas Hungerford Mitchell.  A skilled amateur woodworker, he laboured on the screen from 1873 to until his death in 1890. The elevation of the screen facing the nave was presumably intended it to be painted (its plainness is in stark contrast to the decorated roof timbers with which the screen merges), but Mitchell must have died before his plans could be fulfilled.

The little wooden lectern is carved with scenes illustrating the parables of the wheat and the tares and the sower from the Gospels of Matthew and Luke. The four birds on one of the side panels are particularly charming. Are the lectern and the small alms box near the font also by Mitchell?

The chancel dates from about 1300, but the canted ceiling, decorated with stars, is probably Victorian. The east window was restored after 1890 in memory of Mitchell. The glass is by Charles Kempe, a prolific Victorian designer and manufacturer. It is inspired by the Te Deum and depicts Christ as the King of Glory. The sill of the south eastern window forms a sedile. Before the Reformation the priest, deacon and sub-deacon sat here during the Creed and at other times in the Mass. There is a medieval piscina with a bowl and drain for washing the sacred vessels used during Mass. The priest’s doorway is in its original position in the south wall. Before the Reformation the clergy entered and left the chancel here. The compact choir stalls are Victorian. The inventory of plate includes a chalice and paten inscribed 1662.

The tomb of Sir Francis Choke dominates the chancel north wall. The design of this important memorial is transitional between late medieval gothic and the classical forms of the renaissance. The canopy has a four-centred arch and is flanked by classical columns. The effigy of Sir Francis is bearded and armoured, his head resting on a helm. The inscription reads ‘Praye ye al for the soule of Francis Choke desessed in the yeare of oure Lord A 1562 in the 14 day of July.’ Although English rather than Latin, this inscription shows that the late medieval belief in the efficacy of prayer for the dead was still alive in early Elizabethan England.

In the south aisle a bronze plaque of 1932 commemorates Jethro Tull, the 18th century agrarian reformer and inventor of the seed drill, who in 1704 took over a nearby farm known as Prosperous. The name may be a piece of wry rural sarcasm. Tull died there in poverty in 1741.

The medieval font has an octagonal bowl and a simple pyramidal wooden cover dating from 1680. The lead lining of the font bowl is turned over the edge of the stonework and decorated with groups of concentric circles. The window above the parish chest has good modern glass by Karl Parsons (1884 – 1934), a stained glass artist who lived and worked in Shalbourne.

Behind the organ on the east wall of the transept there is a lozenge-shaped tablet in memory of Sarah-Ann Palmer, who died in 1809. The inscription concludes:

Pain and trouble did I endure

Till God was pleased to send a cure

He called me from this earthly clay

To dwell in realms of endless day

The flag of the United States was left by American servicemen of the Second World War who had been stationed nearby in gratitude to local people for their friendship.

The elegant west tower was completely rebuilt during the Victorian restoration. It is of rectangular stone blocks, with three stringcourses, no buttresses, a slight but noticeable entasis and an embattled parapet. It houses a splendid ring of six bells dating from 1664 to 1983.