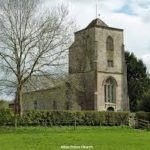 All Saints Church at Alton Priors is now a redundant church and is in the care of the Churches Conservation Trust.  It was declared redundant on 28 July 1972, and was vested in the Trust on 12 December 1973.

The church has an imposing tower and 12th century features, but was probably built on the site of an earlier church.

This is demonstrated by the position of the Norman chancel relative to the nave.

There are Jacobean stall fronts and an interesting 16th century tomb-chest and memorial.

The presence in the floor of the church of trapdoors providing access to some Sarsen stones under the church and the 1,700-year-old Yew tree in the churchyard suggest it was a sacred site long before the church was built.

There is also an unusual brass plaque to local landowner William Button, with a complex inscription. It has been speculated that the message on the plaque, and Sarsen stones may be connected with the nearby Milk Hill.