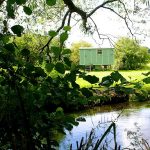 Rushall Organics is a fully organic farm set on the edge of Rushall village to the north of Salisbury Plain.

Run by Nigel and Joe Wookey, the farm is approximately 2000 hectares of which approximately half is arable and the rest is grass, woodland or designated military land.  The farm has been in the Wookey family since 1928 and began its conversion to organic in 1970.

Being an organic farm, the conservation aspect of the farm is extremely important – you can see flocks of finches in numbers you don’t see elsewhere and the River Avon is renowned for its kingfishers and healthy population of brown trout and grayling.

Over the years, the farm has diversified to provide:

Running from April to October, you can stay in ‘Mayfly’ or ‘Angler’s Retreat’ both of which are original, refurbished shepherd’s huts set close to the Wiltshire River Avon – and over 100 years old.

The glamping huts have been re-furbished with the environment and authenticity of the original design at its core with most of the materials being sourced from the farm.Each hut sleeps four people, with an option for one additional person to stay in a tent. Minimum 2 night stay.

Both huts have a two-ring hob and an oven.  Each hut has its own small fridge and all the cutlery and crockery you should need for your stay.

Both huts have Belfast sinks with hot and cold water.

Hot showers are also available at both sites, on the outside of the huts.

Each site has its own compost loo.

The huts are lit by LED lights inside, which are powered by Solar PV panels located on the roof of the huts.

All bedding and towels (one towel per guest) are provided, so you don’t have to bring your own.

Both huts have an available cigarette lighter-style socket, so you can charge your mobile phone on a car phone charger.

One of the jewels in Wiltshire’s crowns is the chalk stream, River Avon.  There is 2.5 miles of the river that runs through the farm, as well as three small lakes stocked with rainbow trout for beginners.  The fishing season starts on 1st April and ends on 1st March.

Rushall Organics offers full driven pheasant and partridge shooting for eight guns per day with a bag of the high sporting birds can range from 150 to 300, depending what you prefer. The day includes breakfast, elevenses and lunch at the end of the day at the Michelin-Starred Red Lion in East Chisenbury. The season runs from 1st October through to 1st February.  You can book a day’s shooting at Rushall any day of the week excluding Sundays.