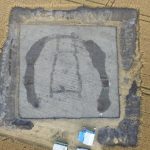 Lying in the heart of the lush Pewsey Vale is Cat’s Brain longbarrow.

Today, it is located halfway between the world-famous monuments of Stonehenge and Avebury, although it pre-dates both, belonging to the early Neolithic period, between 3,800 and 3,600 BC.

The burial mound has long since been ploughed flat, but its footprint can still be seen: two huge banana-shaped ditches flanking the outline of a trapezoidal timber structure that was once covered with earth. This building measures 19.2m long, and is 10.2m wide at the front, tapering to 6m at the back. It was constructed using a combination of posts and beams, and has a floor plan similar to early Neolithic houses excavated elsewhere; originally it may have been a roofed timber hall. A break halfway along its front indicates the entrance way.

The outer ditches were dug as a series of linked pits, and the chalk quarried from them may have been piled over the building, perhaps later in its life after it had begun to collapse. If human remains were ever deposited within the monument, none are present now.

The site was excavated as part of the Vale of Pewsey Project, jointly funded by the University of Reading, Historic England, and the AHRC, and in partnership with the Wiltshire Museum. The project has been the focus of the University of Reading’s archaeology field school for the last three years, and 2017 marks the investigation’s final season of digging.