It isn’t every day you get a chance to rechalk a White Horse!

It’s not that commonplace even in Wiltshire, which is home to 8 of the 14 White Horses in the UK, including the one at Alton Barnes which had recently turned a little grey.

Molly Sutherland, an 11-year-old, year 6 student at Woodborough C of E Primary School had spotted this and decided that the time had come to give the Alton Barnes White Horse its first major makeover in ten years. Molly thought it would be a nice way to give something back to the local community and the primary school which she and her fellow Year 6 pupils were about to leave to go to secondary school. Her father, Rob Sutherland and his chum, Steve Napier (who is also chairman of Woodborough Parish Council), together with Molly and her brother William, aged 9, asked for favours from a range of organisations to give the White Horse a thoroughly deserved facelift. And what a project it turned out to be! 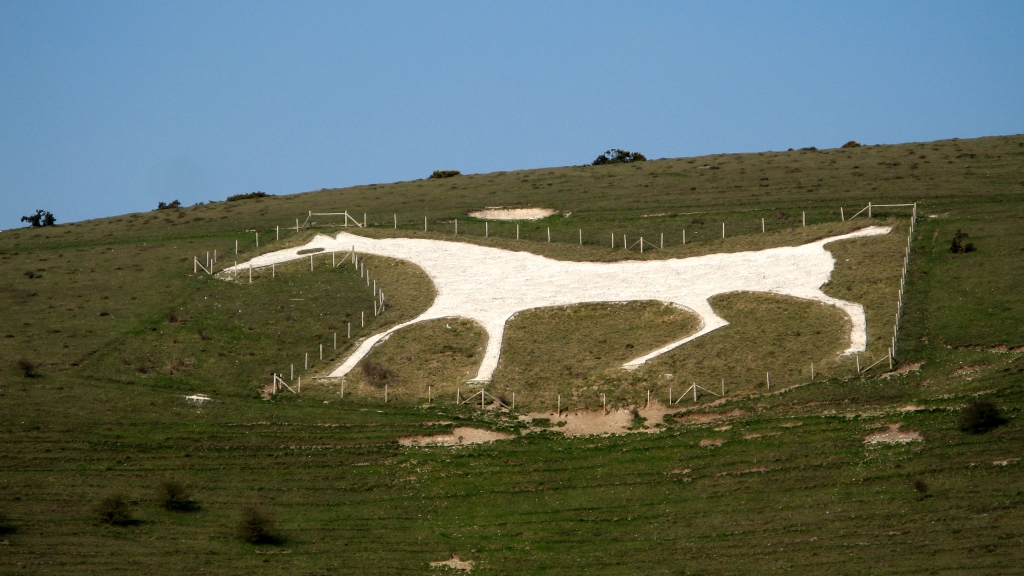 Alton Barnes White Horse is located on Milk Hill about 1.5 kilometres north of the village and is the second biggest of the Wiltshire White Horses at about 55 metres high and 49 metres long.

Created in 1812, the initial cutting did not go smoothly. Local farmer, Robert Pile from Manor Farm in Alton Barnes, paid twenty pounds to a journeyman painter, John Thorne, to design and cut the horse into the hillside. Thorne designed the horse and then sub-contracted the cutting to John Harvey of Stanton St Bernard. Before Harvey had finished however, Thorne disappeared with all the money and Robert Pile had to pay out a second time.

Of course, this isn’t the first time the White Horse has been rechalked, with the most recent before this taking place in 2010. Earlier renovations didn’t always go very smoothly and in 1866, the refurbishers used chalk from a new chalk pit that they dug out just above the horse – the white patch apparently spoiled the appearance for some time afterwards.

The White Horse provides a wonderfully strong sense of continuity, with each generation caring for this iconic feature.  Lee Emery who lives in Alton Barnes provided some footage of an earlier rechalking in the 1960’s in which his father, who still lives in the village, took part.  The chalk was taken up the hill by tractor and dumped into a number of piles just above the White Horse – it was easier to move the chalk downhill than uphill!  Most of the villagers worked on the farm, so about 40 of them got the job done carrying the chalk from the piles to the Horse in tin baths, which were no longer needed in the homes because bathrooms had been recently installed in most of the houses.  The 1960’s renovation was filmed by Guy Stratton who owned Manor Farm at the time and whose family still farm the area today.

Nowadays, however, renovating this particular White Horse is not as straightforward as you might think.

For a start, the White Horse is located in the Pewsey Downs National Nature Reserve – one of the finest remaining areas of Wiltshire’s iconic chalk downland habitat. Views from the reserve stretch across the Vale of Pewsey all the way to Salisbury Plain. It’s glorious and dramatic ….. and it’s a Special Area of Conservation (SAC) for its orchid rich grassland and one of the few remaining sites where the internationally important early gentian can be found. It is also part of the larger Pewsey Downs Site of Special Scientific Interest (SSSI). So you can’t just drive things across it anymore.

It’s also on a very steep hill – very steep indeed! So you can’t easily move things around or carry heavy weights very far once you are up there.

The solution was to fly the chalk in by helicopter, so that’s what they did, courtesy of the RAF!

This exercise provided valuable training for the Chinook Force, based at RAF Odiham in Hampshire, and the aircraft is especially well suited to transporting unusual loads to otherwise inaccessible areas; with its twin rotors and triple hook assembly it can lift almost its own body weight and deliver its load to a very precise location.

So, having sourced the chalk (courtesy of Lovell Partnerships Ltd), transported it to site (courtesy of M.A.C. Contracting), put it into carefully weighed 1 tonne bags (courtesy of Airbus Defence & Space, Wiltshire Concrete, Vitacress and R Hunts from Tilshead), the team was ready for the helicopter. 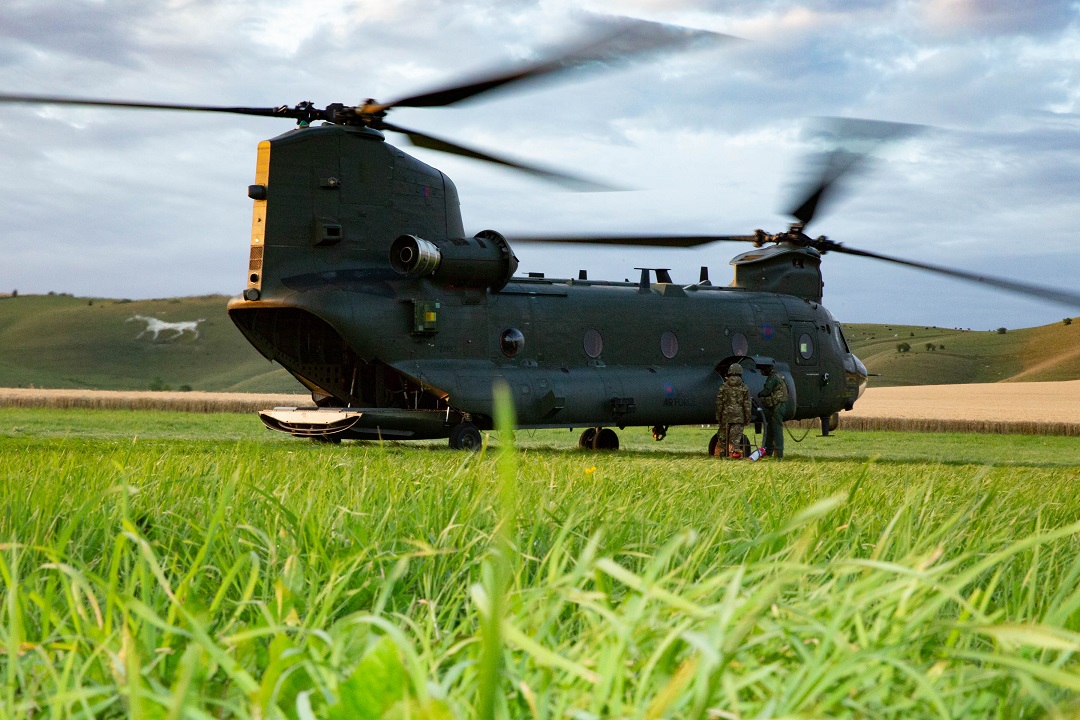 On Friday 19th July, a large crowd had gathered, the traffic on the lanes was at a standstill, the schoolchildren from Year 6 were ready with their rakes and then the Chinook arrived. Unfortunately, so did the rain and eventually, when the hills could no longer be seen because the cloud was so low, the decision was made to postpone the event.

Everyone reconvened on Monday 29th July – just as excited and with even more people this time as the weather was so much better. And the great chalk drop began! The Chinook thudded its way around the area, up to the White Horse on a practice run, swooping low over the hillside. At 4 bags at a time, slung under the helicopter on straps, it took a few hours to get all 46 bags up there. It was getting late, so Molly and her classmates, together with other children, teachers and volunteers, began the chalk spreading with their rakes, starting with the Horse’s head. Seven tonnes were spread that evening but it would take a third day to get the rest of the chalk spread and the White Horse gleaming.

Saturday 10th August – the final leg – and, despite the 40 mph winds and intermittent showers, the raking volunteers arrived in droves. Children, adults, dogs all braved the weather, armed with rakes and buckets and barrows. Teams of shovellers moved the chalk from the bags to the wheelbarrows and then herculean efforts got the wheelbarrows up or down the slope to the required spot. What a team spirit! With the Union Flag flapping madly in the wind, everyone was covered in chalk as they worked to get the covering finished. There were people who lived nearby and those from further afield (including USA, Hong Kong, France, Holland and Sweden), some who could see the White Horse from their house and some who just wanted to be part of it; to be part of this beautiful White Horse’s history. To be able to look up as they drive or walk past and think ‘I was part of that’. 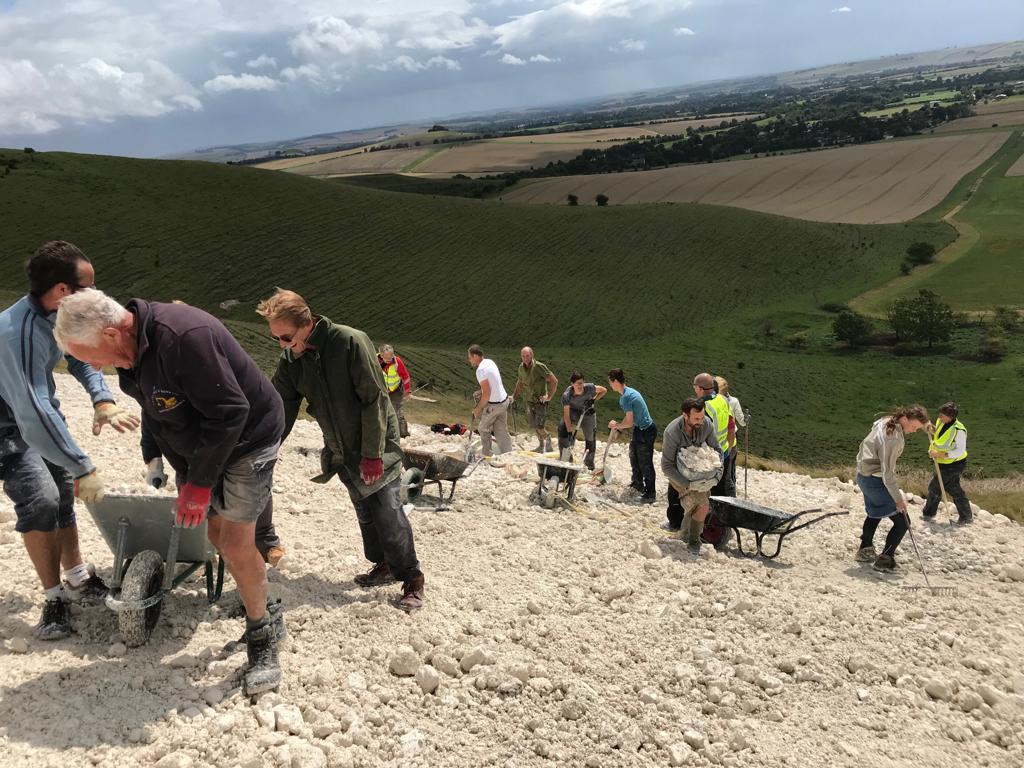 After all, it’s not every day you get a chance to rechalk a White Horse. 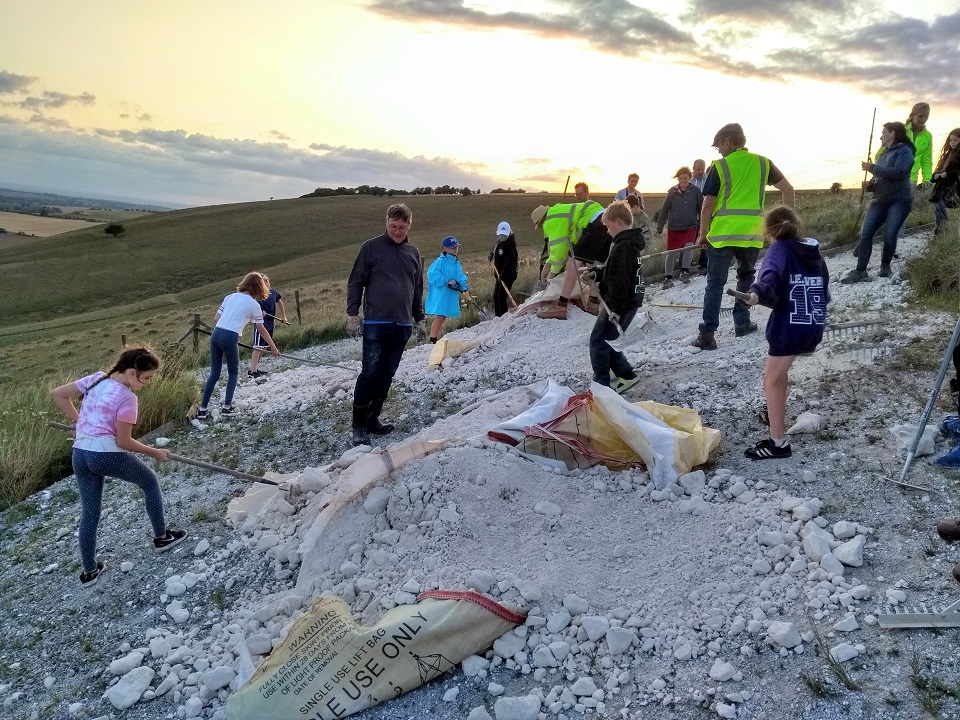 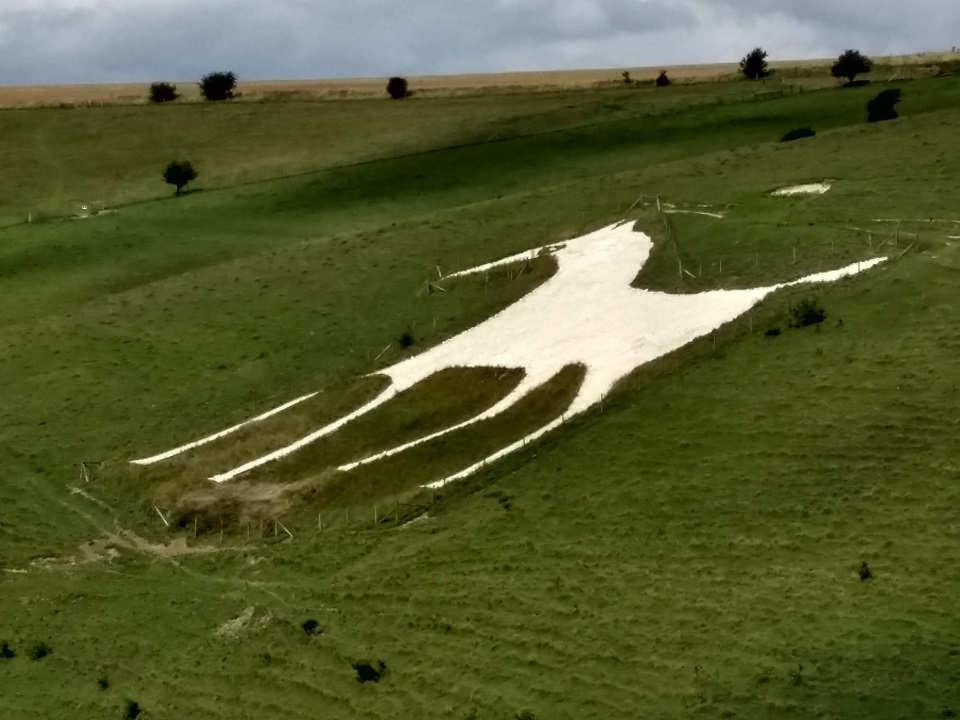 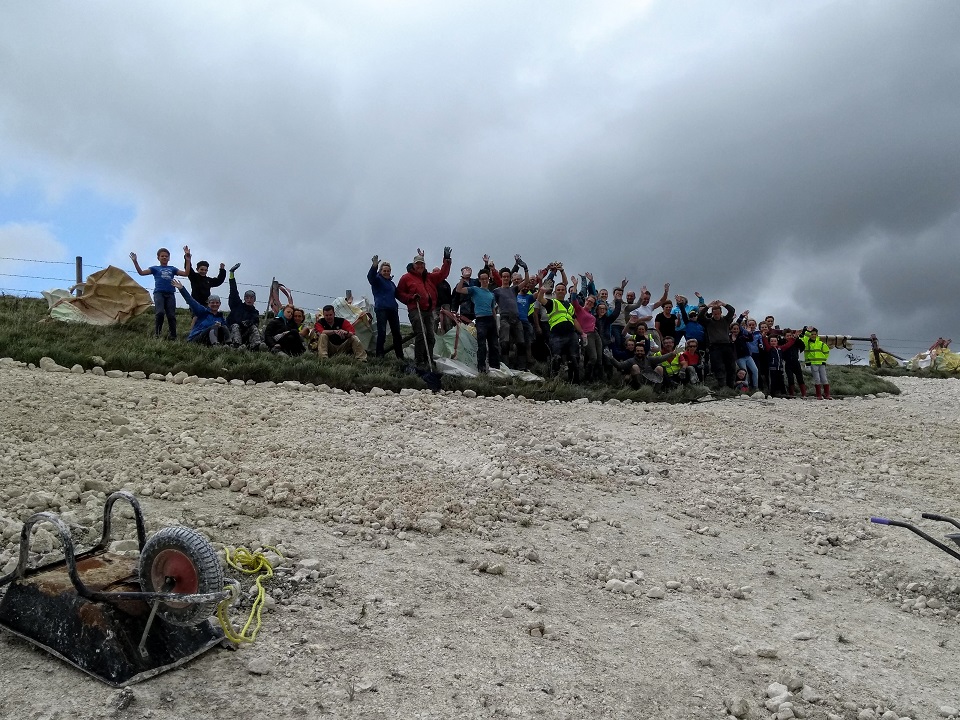 Alton Barnes White Horse can be seen from across the Vale of Pewsey and lies on the south-facing slopes of the Pewsey Downs to the north of the A361 road between Alton Barnes and Devizes.

The project would not have been possible without the support from Wansboroughs Solicitors in Devizes, Jewsons in Devizes, Northdoor, Barlows Woodyard, Joint Helicopter Command and Wiltshire Constabulary.