And the 21st century is no different with a wealth of local artists and writers all contributing to the spiritual and creative feeling of the Pewsey Vale, reflecting the splendour and wonder of the nature and landscape that can be found here.

One of the artists whose work is based on the Pewsey Vale countryside is Jo Hand, who moved to Pewsey in 2013 from Middlesex.  Pewsey is a perfect location for her creative work as an artist and for her husband’s need to commute to London. 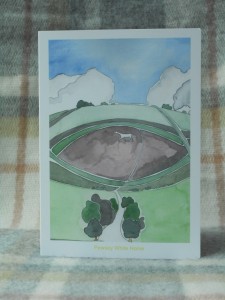 Jo uses the beauty and drama of the Pewsey Vale in her prints and greeting cards, which feature subjects such as the picturesque village of Wilcot, the Pewsey White Horse and the Kennet & Avon Canal at Pewsey.  Jo’s favourite walk for inspiration is one that takes her from Pewsey Wharf, up to Oare and the Giant’s Grave and Martinsell Hill – probably about 4.5 miles in total.

Another regular jaunt is from Pewsey village up the steep climb to the Pewsey White Horse – the views are stunning and the setting is peaceful yet wild.

Much of Jo’s work is pen and ink but she has also introduced colour, particularly in her greeting cards range which can be found on sale in a number of local outlets, including the Community Craft & Tea Room by the bridge in Pewsey. You will also spot them at the Pewsey Heritage Centre, The Waterfront at Pewsey Wharf, Honeystreet Café and Sticks and Stones at Woodborough.

Jo has also illustrated a book – Beauty & the Silver Cup – and her work is available online, to view or to buy, on her website at www.johand.co.uk.

The community is very close to Jo’s heart and so she is supporting the Brighter Futures Appeal at Great Western Hospital in Swindon to provide radiotherapy equipment for cancer patients.  During May 2016, Jo raised £17 towards the Appeal through sales of her cards at the Pewsey Community Craft & Tea Room, where £1 per card was donated to the Appeal. 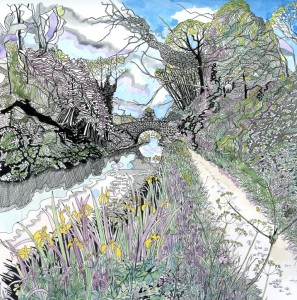 Visit Pewsey Vale teamed up with Jo to create a special offer for our followers to win a set of Jo’s cards.

The competition is now closed (13th May 2016) and the winner was Jackie Macbeth – congratulations!