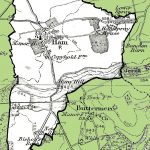 Wansdyke is the Anglo-Saxon 50-mile defensive earth wall and ditch which arcs across the north of Wiltshire.

There are various opinions on when it was built and what its primary purpose was, but most views suggest that it was built at some time in the Dark Ages.

The eastern section of the wall ends in Ham and vestiges of the wall can be seen along Old Dyke Lane on the parish’s eastern boundary. The wall was punctuated by a series of gaps or gates to allow the passage of men and cattle.

The site of what was known in Saxon times as the Flaxfield Gate is where the road from Inkpen to Ham crosses the county boundary; it is marked by an old iron county boundary sign at the south side of the road