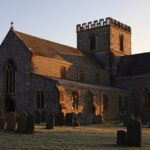 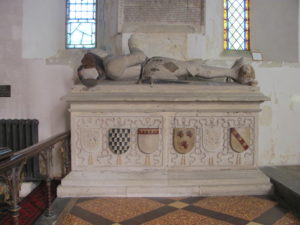 The Church of England parish church of Saint Mary the Virgin was started in 1092 but was not completed for another 200 years.

Beneath the church are the massive remains of a Saxon church begun in AD 905.

The church is designated as a Grade I Listed building.

The church contains the tomb of Sir John Seymour (1474 – 1536), the father of Jane Seymour of Wulfhall (or Wolfhall) in Savernake Forest, who married Henry VIII in 1536.

The inscription above the tomb proudly refers to  “Jane Qveene of Englande, Wyfe of Kynge Henry the Eight and Mother to Kynge Edward the Sixt