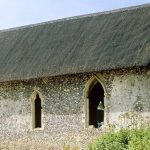 Dating from the 13th century, this delightful chapel was built as a chapel of ease – in other words it was more convenient.  It was originally constructed by the lord of Chisbury Manor not only to assert his high social status but also to enable the household of the manor, as well as local people, to attend services and pay their taxes without having to travel to the parish church at Great Bedwyn.

The building ceased to be used as a consecrated chapel in 1547 at the time of the Reformation, and has been used as a barn for the past three centuries. The building is a pretty thatched and flint-walled construction, whose original function is still clearly visible today.

There are two vertical lines within the plaster of the side walls that mark where the rood-screen – a timber partition surmounted by a cross – once separated the altar from the nave. There is also a red cross. Crosses were painted on the walls of a church during the consecration ceremony, marking the religious status of the building.

The chapel is positioned on the edge of the earthwork defences of a much earlier Iron Age hillfort, known as Chisbury Camp. This area of high ground was in a strategic position useful for defence and was occupied into the Romano-British period and can be seen from the train as you travel through the Vale.

Opening Times:
Open any reasonable time during daylight hours
Visit English Heritage website
Category:
Church, Places to Visit
Directions:
Follow the brown signs from the small green in the centre of the village. Please park considerately on Chisbury Lane. The chapel can be reached by walking 300 metres on an uphill track.