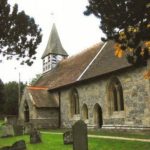 The church originally stood in the grounds of the Saxon manor house.

Wootton came into the hands of the de la Riviere family after 1281 and the list of vicars dates from 1321.

The Great War had a devastating effect on the population and there is a memorial on the north wall.

The bells were relined and reinstalled in December 1999.

St Andrew’s has a well-known clock – Jack Spratt’s Clock – which has three faces, a very unusual dial and an interesting story!

A different chime rings for each hour.