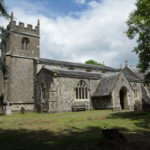 The fact that a priest is recorded in the Domesday Book indicates that a church stood here in 1086 and this was probably a Saxon foundation associated with the 11th century estate of Burbage. In 1139 the church and its income was given to Salisbury Cathedral and Burbage was probably served by a chaplain, until the late 14th century when a vicar was ordained. The church is first recorded as being dedicated to All Saints in 1213 but the dedication could be earlier. The church seems to have been rebuilt in the 14th and 15th centuries with the chancel, tower and its west porch of the 14th century, and the south aisle of the 15th. A south porch was added in the 16th century. The parish was one of many to have its vicar, Hugh Nash, ejected during Parliamentary times, in 1646. He was restored in 1660 on the Restoration of Charles II. Between these times, in 1650, the vicarage house was said to be ruinous and it was presumably restored or replaced. The only other major alteration to the church, until the 19th century, was the raising of the south aisle and the building of a gallery in 1702. On Census Sunday in 1851 the average size of the congregation was around 150. It was decided that a new church was needed and the existing one was largely rebuilt, in patterned stone and flint, in 1853. All that remained of the old church was the west tower and its porch; The chancel (with a south chapel added in 1876), clerestoried nave and south porch were all new. A new vicarage was also built on the site of the old thatched one that had low ceilinged rooms. T. H. Wyatt was the architect.

The church remained little changed, although with a falling village population there were fewer parishioners to fill it. In 1969 the vicarage of 1853 was sold and replaced by a new house, while in 1973 most of the Savernake Christchurch ecclesiastical parish was added to that of Burbage. This united benefice became part of Wexcombe benefice in 1979. There were three bells in the tower in 1553 and these were changed to a ring of five in 1607. The parish registers from 1561, other than those in current use, are held in the Wiltshire & Swindon History Centre at Chippenham.