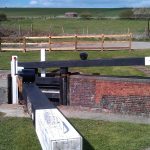 The 87 mile Kennet & Avon Canal stretches from Bristol to Reading and incorporates 105 locks on its way.

The two river stretches (the Avon between Bristol and Bath and the Kennet from Newbury to Reading) were made navigable in the early 18th century, and the 57-mile (92 km) canal section was constructed between 1794 and 1810.

The use of the canal was impacted greatly by the opening of the Great Western Railway and its route between London and Bristol opening in 1841.  As a result, the canal gradually fell into disrepair.

In the World War II it was considered a line of defence and so you will still see today the concrete Pill Boxes that were constructed along its route.

In the second half of the 20th century, and after much campaigning to save it, the canal was restored and fully reopened by the Queen in 1990.

Today, the Kennet and Avon Canal is host to boating, canoeing, fishing, walking and cycling activities and provides a quiet space for wildlife to flourish.