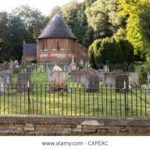 This church was built in 1858 and served by the vicar of Wilcot and his curate until 1892 when it became a separate parish.

The church was designed by S. S. Teulon and built of red and blue brick.  It has a nave with a south porch and a chancel with an apse.

It was described by one commentator as ‘the ugliest church in Wiltshire’, though this statement has not been universally endorsed.

The plate is modern.

The parish registers from 1858 (baptisms), 1859 (burials), and 1892 (marriages), other than those in current use, are held at the Wiltshire & Swindon History Centre in Chippenham.

On the WW1 Memorial is a lady – Hermione Rogers – her tale in on the community Blog – A real life Crimson Fields Hero.